The Premise of Geri’s Game 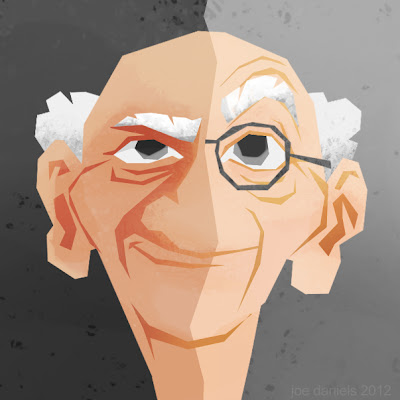 One of my favorite short films by Pixar is Geri’s Game.  I’ve been reading a lot on writing theory these days, and thought I’d share some things I noted upon watching the short again recently.  Hopefully this post will be useful to beginner artists in the entertainment industry, or at least make for an interesting read.  If you have opinions, feel free to comment.  This is the internet, after all.

Geri’s Game is the academy award-winning short directed by Jan Pinkava that screened in front of A Bug’s Life.  It’s the story of an old man who plays chess against himself, literally, vying for a pair of dentures.


I want to look at it in terms of motivation and acting, as they stem from theme or premise.  And this is a great case to study with regards to keeping the acting consistent between characters (for you filmmakers or animators out there).  As we will see, not only are the two Geri’s handled differently in terms of personality, but the choices were made, whether consciously or intuitively, based on the story’s premise.

I’m taking my definition of “premise” from Lajos Egri to say that a premise is the underlying statement that the story seeks to prove.  That’s a most excellent concept, one that I wish I had grasped as a student, plugging away at my own short films.  In order to tell a compelling story, we need to have something to say, and we need to say it through the conflicts and resolution in the story.  And conflict resolution does not necessarily mean that a premise was proven, or even that it was consistent.  Let me keep going and see if it makes sense.

Just about everyone chants that mantra: “story is king”.  And I nearly agree.  Characters and situations should develop to serve the needs of the story, but how do you know you have a good story?  What guides the decision making in a story?  Stories are complicated beasts, but as it turns out, any good and complete story is directed by a premise or argument, and successfully proves that point of view in the given case.  If a story fails to make a judgement about the course chosen by the protagonist, the story will feel like it has holes.  Let’s be clear, I’m not talking about beating the audience over the head with some sort of pushy message, so let’s have an example.

We will borrow an example of premise from Lajos’ book The Art of Dramatic Writing.  The premise of Romeo and Juliet is that “Love defies even Death.”  The characters and situations are built and made to interact to create a story that shows this.  The general structure of a premise is something like “________ leads to _________” and it needs to include a hint at the main players, and how the story will resolve.  Given this definition, the premise of Jurassic Park could be something like, "Attempting to control nature leads to destructive chaos." (I recently saw Wreck-it Ralph, but I'm refraining from posting what I think the premise of that movie is, until it's been out for a while. You should see it, btw.)

Now, let's get to what I think the premise of Geri’s Game is.  We have an elderly man who is actually two characters.  You may notice that the protagonist and champion (wears glasses) is framed with mostly yellow trees in the background, and the antagonist (no glasses) is framed in front of red trees, to help us differentiate between the two players.  So I’ll refer to the protagonist and antagonist as “Yellow Geri” and “Red Geri” respectively.
Yellow Geri technically cheats to win the chess match, or more accurately, he uses his creativity to solve his problem.  (A fine line to walk, I know. We'll touch on this later.)  Red Geri is focused on winning by means of his skill, and he’s ruthless.  Clearly more talented at the game, Red Geri is ready to flatten his opponent.  So what we see is that creative problem-solving (Yellow) triumphs over raw talent (Red).  And that is our premise.  Creative problem-solving triumphs over raw talent. 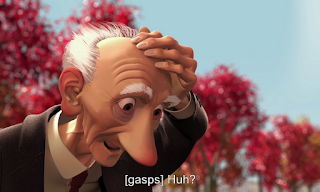 Does this hold up? What can we do with this information?  Well we certainly see that Yellow Geri knows the rules, but lacks ability and deep understanding of the game that Red Geri exudes.  A good example is soon before the resolution where Yellow Geri is pinned in the corner, and at every attempted move, Reg Geri shakes his head and laughs.  We can also see how effortlessly Red Geri takes over the board.  I want to stop for a moment to interject and say that this is an important part of knowing your character.  If you know that the premise is “creative problem-solving triumphs over raw talent”, then we must show those traits to be the primary source of conflict, and we must show that there is no other way out.

Let us look closer at the acting and see how knowing the premise that is to be proven can help even the animators as they make acting choices.  Imagine a different take on this story, with different acting.  Envision for a moment that this piece showed a man playing chess with himself, and maintained skill level and creativity throughout the match on both sides.  It would be neck to neck until the end.  We could even build the tension like a professional sports game where at the last moment, an amazing play is made and one is victorious!

And if we show Red Geri being very creative in catching the holes in Yellow Geri’s plans, we weaken our argument.  He's not supposed to see the switch coming. He's blinded by his competitive spirit that grew from exercising his supreme talent. So in order to prove our premise, they must have different personalities, and therefore different motivations and approaches, even though their goal is the same.

I would say that it is subtle, but Yellow Geri seems to genuinely be motivated to get the teeth.  We see this from the first shot where he chews on his gums, missing the dentures.  In fact throughout the film, Yellow Geri is the only one who does this.  Red Geri does not.  He seems most disappointed in having lost the match, being as competitive as many very skilled people are.  His gestures do not suggest that he actually wishes to use the dentures, only to keep them in his possession as a trophy. 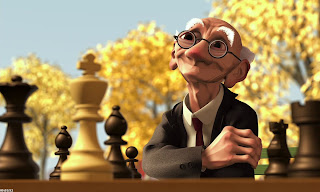 So this is the really great thing for an animator.  If you know what your story seeks to prove, you can weave it into the personality of your characters.  Without this basis, one can only intuit what feels right, and it will be easy to get off track.  Why would a character not behave in a certain way?  Why does he like pizza?  Why should a character have a limp, or messy hair, or a nervous twitch?  Or better yet, when should he twitch nervously?  Well the answer should come from asking what best pushes us toward proving the premise that the story is based on.

And that’s why Yellow Geri does not know that he’s going to play the trick on Red Geri until right before he does.  If there were any hint of premeditated deception, it wouldn’t have been creative problem solving, it would have been about thievery.  In which case we would have seen a story with very different needs.  A story that may or may not touched people deeply enough to have won the Oscar.

It's hard to tell a good story without knowing not only what your story is, but what it says. You can have a number of different premises for the same setup and yield wildly different results. Choose the best one for your particular story, and you'll have a strong root for all creative decisions to stem from.

I was actually googling to find out if an approximate analysis of the actual chess game was done by someone. But I find your post and it was really enjoyable to read.

I especially liked the "Yellow Geri” and “Red Geri” part - I hadn't had any thoughs about that at all.

Thank you very much, so nice of you to comment. I hope you found what you were looking for elsewhere, as I'm certainly no chess master. I play about as well as Yellow Geri.
Cheers!

If Yellow Geri does not have any valid moves you might think the game is a draw by Stalemate. Before the "Stalemate" situation Black takes White's Queen with his Queen, hence the position was already lost because later on you see the dark square Bishop lined up with the Queen which just took, meaning White's Queen was pinned the move before!
By taking with check and (apparently) leaving no room for White's King it should be checkmate already.
White tries g2 which is guarded by the Knight, then f1 which actually is the forcing (only valid) move leading to a "mate in 1" by Black's light square Bishop, and at last h1 (but not h2?) -> the whole h-file is covered by Black's Rook. He was smart enough not to try f2 because that was where the diagonal Queen-check was coming from. After turning the board there is a mistake, White was still in check and did not move, Black then already attacking the King(!) delivers another possible checkmate with Queen to e1...
Multiple errors regarding chess, if you pay attention to the story rather than to the actual position on the board, it still is a very nice animation, one I remember from my childhood ;)

Tomasz K., you clearly have a far deeper understanding chess than I do, which is great. I guess both Geri's should keep practicing, then. Perhaps there will be a sequel ;) Thanks for adding to the conversation.

This is great stuff! I enjoyed reading your analysis. I'm very curious to know to what significant role the dentures played in the story. Could it be that the character set up a playful game to award himself the dentures? What are your thoughts?

Thanks, Jason. Well the dentures are a great prize, and a nice and simple way to satisfy the audience with an explanation of the game's stakes, with a bit of visual humor.

Something I do notice is that our protagonist seems to be all for using what you can bring to the table, both literally and figuratively. Instead of distracting Red Geri with an outside force (weather, other characters, etc.), our filmmakers decided to keep it personal. Yellow Geri uses only the tools he comes with to overcome his imagined chess mate.

Perhaps we could say from this that a true master works within his means. That the means to solve a creative problem doesn't come from without but within. Hmm, I shall have to chew on this a little longer. :)

Nice analysis.
Of course it is vital for the audience to build sympathy for the protagonist. Yellow geri is clearly losing. We feel sorry for him as the underdog. we want him to win against the over-confident and condescending red geri, who we feel is mean-spirited.
And it is only because we pity Yellow geri so, that we DON'T see his move as cheating...or , if we do, that we say "good on you that you got away with it, because red geri doesn't deserve to win."
It's the same for poor old (or young) romeo and juliet...we sympathise with their plight, and so we are emotionally torn by their tragic demises.
It's been a while since I watched this short...I'll have to give it another view.
Cheers!