The Future of Pre-production

That title may seem a bit presumptuous to those who have yet to sketch in VR, but for those of us on the other side, there's no going back.  For pre-production on films, game cinematics, and even amusement park rides and theatrical productions, there are so many benefits to creating this way.

Hope's Blade is an animated piece I made in October of 2017 for a presentation I gave at DreamWorks Animation, called VR for Storytellers.  I gave myself a little over a week to come up with an idea and draw, shoot, and edit it, completely done in an app called AnimVR.  It was such a blast to work this way, and amazing to work with the devs as they began to build a toolset for recording real-time cameras for editing in a timeline.  Check out more on AnimVR at www.nvrmind.io

Visualising stories in VR has a number of huge benefits over traditional storyboarding and previs pipelines, allowing artists to solve difficult spatial choreography in intuitive ways.  And I'm not just talking about projects that are meant to be output for VR.  Every production can benefit from this workflow.

Since these story sketches are inherently 3D and can be viewed in the round, you can change your cameras on the fly without having to re-draw.  These dimensional story drawings can also be used to better inform the work of environmental and character modelers in a traditional Film or Game production pipeline, and concept artists can also feed art into these storyboards -- making for more useful collaboration.  And the aspect that is often most surprising to people is that even at this early point in the development of VR art tools, storyboarding this way takes basically the same amount of time as traditional methods.

If you're interested in seeing what people are doing with animation in VR, head over to the Virtual Animation facebook group.  Prepare to be inspired :)

VR & Museums of the future

Last night I was part of a gallery exhibit -- my first time displaying at a museum.  Only this museum was populated by all sorts of physically impossible artwork, and wandering through the halls were people from around the globe.  By that I mean people who were at that time located on different continents.  And it was awesome.

This museum is a virtual museum, experienced in my Oculus Rift. (Also works with Vive).  It takes the enjoyment of viewing art to the next level and makes it possible to interact with artwork, creators, and other viewers in completely new ways.

I can't say much specifically about the museum since it's in Beta and much is likely to change and improve between now and when the museum opens to the public, but I will say that it takes all of my favorite things about being in a museum space and adds sight and sound experiences to that which are impossible outside of Virtual Reality.

There is an impressive list of artists already on exhibit, and it was an honor to hang out with some of them and chat...whether standing inside a Tilt Brush painting or sitting on the back of a dinosaur that was painted in Oculus Quill.  Here's a short list of exhibitors who were featured this month: Liz Edwards, Nick Ladd, Zach Kinstner, Romain Revert, and Sebastian Sanabria.  (If I forgot anyone, please comment and I'll update.)   My contribution was an animated piece Fast Food, which features a small fish endlessly attempting to swim away from a rather cuddly-looking hammerhead shark.  If you check it out, there are some hidden things to find inside the shark ;) 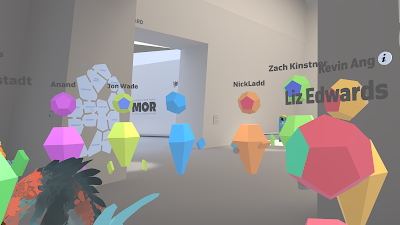 Another thing that is really cool about this type of museum is the direct promotion that can be gained for the artist.  For instance, Zach's musical exhibit is a performance created in his app, EXA: The Infinite Instrument.  From the info plaque, I could learn about it and immediately hop over to the Steam Store to pick it up and check it out...to experience more of the same thing, on my own time and financially benefit the creator directly.  EXA is a lot of fun, and I highly recommend you check it out if you have a pc vr headset.

Here's what really interested me personally: viewing animation, on display in a museum, in its native format.  Let's think about that for a minute.  Up until now the ways one can view animation have been greatly limited, compared to other art forms.  Theater, dance, sculpture, and other fine and performing arts are best viewed when physically present with the art.  3D models can be printed to be brought into a dimensional world for viewing but until recently there was no reasonable analog for 3D animation.

Aside from exhibits like the Pixar Zoetrope and this Gatorade ad, animation is recorded or rendered for display on a flat surface.  Even in stereoscopic 3D theatrical experiences, you're cheating the brain into thinking a 2D image has depth but the viewer lacks the freedom to move in and around the space, and is only slightly immersive.  Animation is the art of creating the illusion of life, and wouldn't it be great to pull our characters off a flat screen and into our living rooms? 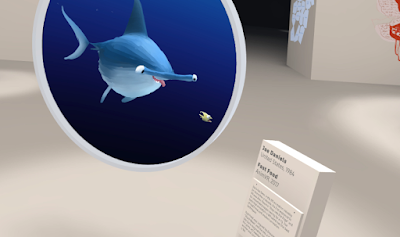 My hand-drawn animation was drawn in VR in three dimensions, and viewers get to experience this art in the exact same context as it was created.  The equivalent in traditional animation would be mailing tens of thousands of sheets of paper to a viewer for them to flip like a flipbook, or in stop-motion it would be inviting the entire world onto a set to watch for days as puppets are meticulously posed frame by frame, but both of these impractical scenarios miss the mark by lacking the immersive connection you gain with the virtual characters you can experience in VR.  In VR you're there, existing with these illusions, in real-time.  And once you experience that, I think you'll feel that it makes a world of difference.

Another thing that excites me about all this is that next logical step: the possibility of creating interactive character animation experiences where our characters react to you and not just you reacting to them.  This dream is only a few steps from reality, and it's gonna be huge.  Stay tuned for more virtual animation, coming soon.
at 10:03 AM No comments:

Hopefully, you've enjoyed some Star Wars this month.  It's been great seeing all the awesome fan art people have been sharing lately.  Here's my hand-drawn contribution, animated in AnimVR.

Kylo Ren fan art from joe daniels on Vimeo.
at 9:01 PM No comments:

Before I head out to CTN-X 2017, here's an update on something I've been working on the past few weeks.  I've recorded hours of process video and when it's finished I'll edit it together and put it up on my gumroad.  So follow me there if you want to be notified when it's out.  Animating in VR is truly incredible, so I can't wait to share this with you!

I want to say a huge thanks to Kristine Middlemiss and the rest of the crew that helped make my presentation possible today at Dreamworks Animation.  It was excellent to see everyone who took time out of their day to drop by.  The topic was VR for Storytellers, and how this collaborative new medium can make our lives better.  Here is an abbreviated version of the slides, as promised.  Cheers!

I've been having a blast making art with my Oculus Rift.  It's more physical, intuitive, and intimate of a process than anything I've experienced to date.  Here is a look at my last couple weeks poking around in the evenings...


Animating in VR - for Artists from joe daniels on Vimeo.


Have fun rotating and moving around this painting done in Oculus Quill, or if you have a headset and compatible browser, check it out in VR!  (vimeo link below in case the sketchfab embed does not work for you.)

Quillerina by joe daniels on Sketchfab


And here's an early WIP of the next painting I'm working on.  See more of my recent art on my Instagram.

I've been beta testing a new app for the Vive and Rift named ANIMVR.  It's a drawing and painting program designed for frame by frame animation.  It took a bit to get used to the controls, but I am seriously loving this!

The .gif in this post was sketched out tonight in about 1 hour of messing around in a "straight-ahead" approach.  I definitely want to do more of this.  Keep your eyes peeled for ANIMVR when it comes out.
at 3:39 AM No comments:

Congrats to my friends who labored to make Disney's Moana the beautiful film that it is!  If you haven't seen it yet, go check it out.
Here's some fan art of those adorable Kakamora characters. 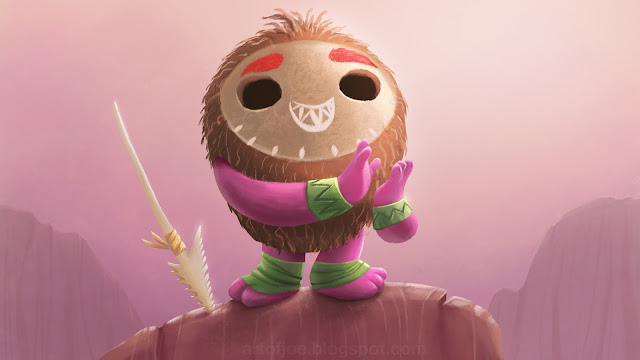 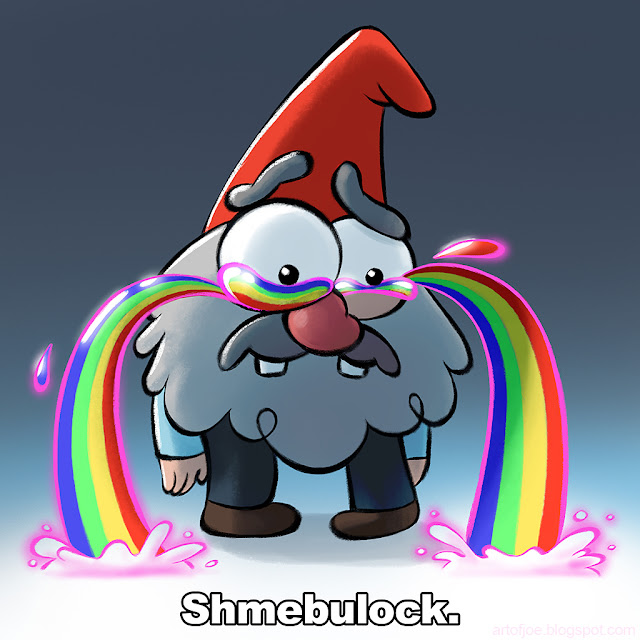 A short time ago, in a theater not far away... 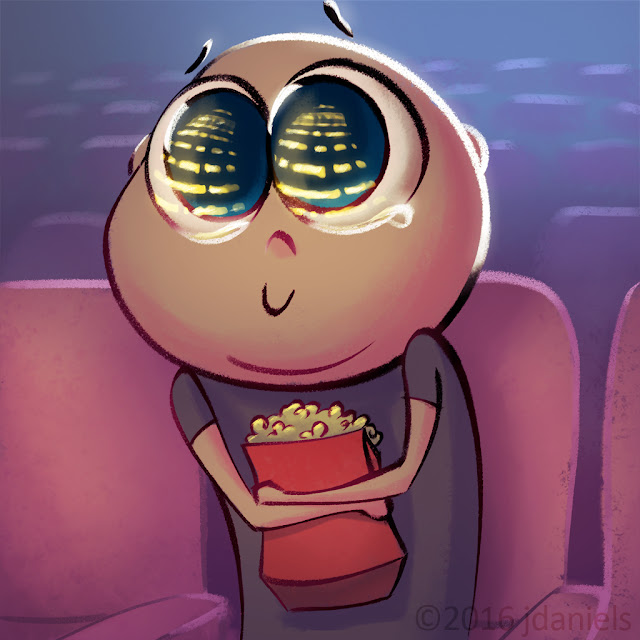 Taking my son to Star Wars was a blast!  I've had this one in my head for a while, and finally had the time to get it out.