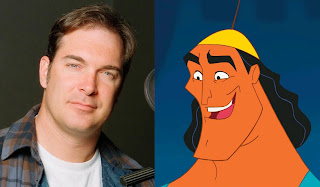 A few months back I was talking with friends about movies and actors, and the discussion turned to how we identify people in movies. In our small group, all of the guys generally knew an actor by the different roles he or she had played. ("He's the guy that voiced Kronk in Emperor's New Groove...") Whereas the girls all thought of the actor's name first, characters second. ("You know, that's Patrick Warburton...")

So I thought this discussion was interesting enough to post here and see what people reading this blog think. In general, how do you identify with the people who appear in films or on TV? Which is it, actor or character? Let me know, I'm curious to hear what you think.
at 9:53 PM

Maybe I'll be the first to change your male/female findings, but I'm a woman and I think of people in films more as the character than the actor. Of course, you know I don't remember all the actor's names but I remember the character they played. Nice question to ponder.
Mom